Jay Chou’s restaurant was part of our itinerary cos Jay Chou (周杰伦) is legendary. I love说好的幸福MV cos Angelababy is in it! Angelababy is so pretty. Back to reviewing the restaurant, we had such a hard time getting there because we’ve only gotten instructions online to take the shuttle bus. But what happens after that?! We got off the shuttle bus, went straight into the Hospital and asked for directions. Most of the people didn’t know where it was and we were like HUH? It’s Jay Chou’s restaurant. How can the locals not know?

But anyhows, we managed to find our way there. The restaurant theme is based on his movie, The Secret. There is a lot of Jay’s memorabilia in the restaurant – awards, guitar etc. Some of his awards are showcased at the front of the restaurant and there was a huge Transformer head hanging from the ceiling.

They served us ice water promptly after we sat down. Impressed! There are different combinations of set meals for different prices. I ordered the set that comes with soup-of-the-day, garlic bread/salad and a drink. Simply top up NT$59 to your main dish. Value for money!

THE GARLIC BREAD IS AWESOME. Easily the best dish and we wished it was FREE FLOW. Why is it not free flow? Crispy & toasted to perfection. Very buttery with just the right amount of garlic-ness.

The soup of the day was Creamy Vegetable and it came with a piece of toasted crouton. It was pretty awesome!

We ordered pastas for our mains. Just go with the Creamy Ham & Mushroom Fettucine. The Creamy Chicken Penne has some weird vegetables that tasted like curry leaves and it kinda spoilt the dish.

We didn’t get our drinks midway through the meal. In Singapore, they always serve the drinks first (kinda). So, we asked a male server for our drinks in mandarin,

Us: 我们叫的水还没来。(Our drinks haven’t arrived.)
He: 你们的水在桌上，有什么问题吗? (Your water is on the table, is there any problem?) *in a very nonchalant tone*

We were taken aback by his attitude and we thought we had made a mistake. Maybe our set doesn’t come with a drink? Maybe the waitress who took down our orders didn’t write it down? It turned out that they only serve drinks after you finish your main course. I thought the service was ok and probably by Taiwan’s standards, it could be considered bad. Firstly, we didn’t feel very welcomed when we stepped in as the servers didn’t smile or greet us, which was OK. But the male server incident was unforgiveable. Come to think of it, it was very rude of him! Duh! Of course we know we have 2 glasses of water on our table but we wanted the drinks that we ordered! Did he think that we are idiots? Grr..

Most diners are tourists and you can see many excited Jay’s fans posing with the grand piano and his posters. Nice ambience and surprisingly good food at very affordable pricings. We paid about S$15/pax. Awesome except service needs to be improved.

Agnes B Cafe
How to get to Agnes B Cafe
Taipei City Hall Station, take escalator up to Breeze Center (微風廣場)

Since there’s no Agnes B Café in Singapore, we got pretty excited when we saw the café on the store directory. It was raining and we were freezing. It was the perfect weather for a warm latte. 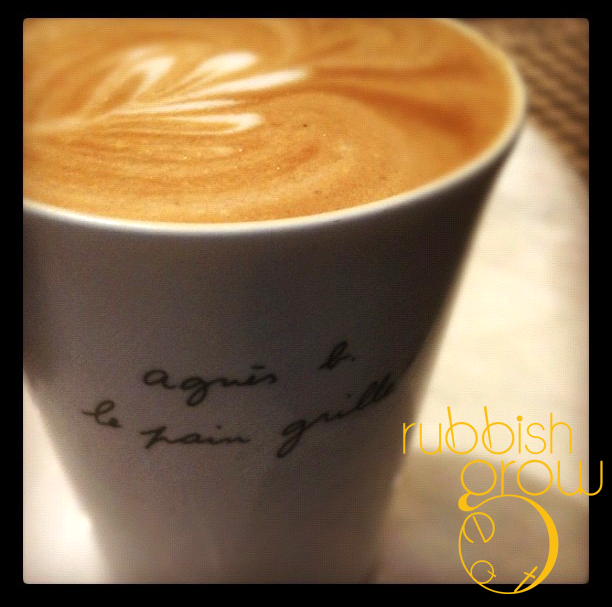 Drinks were OK. Chloe was disappointing because it’s like some lao-hong dry biscuit instead of a cake. 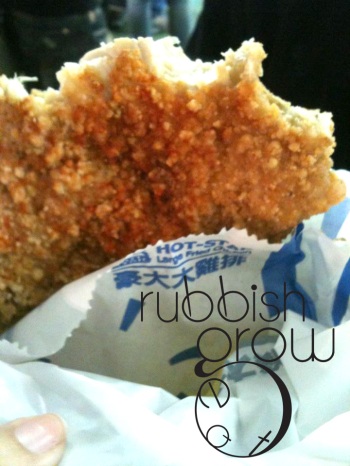 豪大大鸡排stall is at the 1st row with blue signboard, facing the metro station and you definitely won’t miss it. We were quite confused as there were 2 stalls with the same name along the same row. However, go to the one with the queue or with a guy giving out plastic bags to put your Large Fried Chicken in. It’s NT$55. The other stall is selling at NT$45. No idea what’s the difference! Remember, when it’s your turn, just tell the uncle whether you want it spicy or non-spicy. He will put the chicken in the paper wrapper and put it your plastic bag. It’s a fuss-free process. Thumbs up for efficiency! The portion is huge so just order 1 to share! There were bones in our Chicken and the chicken was quite dry. Maybe we came on a wrong day. Bummer.

Other things to try at Shilin Night Market (Food)
Just explore the Food market, it’s not that big!
– Wok-fried Quid (生炒花枝)
– Bun in a Bun(大餅包小餅)
– Big Sausage wrap Small Sausage (大肠包小肠)
– Herbal Stew Ribs(藥燉排骨)
– Snow Ice(雪花冰)
– Oyster Omelette (蚝煎) This is different from Singapore’s! It comes with an orangey sauce. I don’t like it.
– Coffin Toast (棺材板) Toast with fillings in it which you can choose