3D2N Penang Itinerary Part I: The Rise of Massimo Bread, Lodging and Other Travel Information

Huccalily asked our driver, “Do you eat Gardenia bread?”

She giggled, “You eat political bread too!”

Why is Massimo bread political? A Penang local told us that Robert Kuok, the second richest man in Southeast Asian, ex-student from Singapore’s Raffles Institution, had been selling flour at a loss to Gardenia Bread (which is run by relatives of Malaysian PM’s wife) for years. This is because Kuok cares for the people and wants to keep food affordable for everyone. But Gardenia kept increasing the price of its bread and Kuok didn’t see the point of losing money to corrupt politicians, so he wanted payment for the exact price of flour. The politicians rejected his proposal and refused to buy from him until he sold them the flour at a loss. Kuok has 100, 000 workers for him–what can he do to save the jobs and sell the flour? That’s right–he set up Massimo Bread in 2011, the only bread that doesn’t have preservatives. 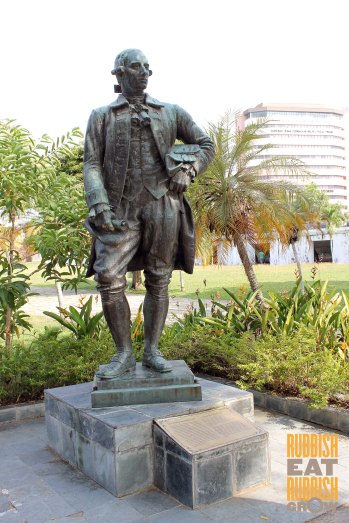 The history of Penang, known as Pearl of the Orient, is very similar to the history of Singapore, but how did Penangites get so political that even a driver eats bread to show his anti-government sentiments and Singaporeans so apathetic? In late 1700s, Captain Francis Light of British East India Company landed in Penang and the Sultan signed the land over to him. Light re-named it Prince of Wales island, because the acquisition date fell on the prince’s birthday. It is said that he fired silver dollars from his ship’s cannons to encourage sepoys to clear the undergrowth.

Like Singapore, it was founded as a free-trading entrepot. In 1826, it was the capital of Straits Settlement (including Melaka and Singapore), until it was superseded by Singapore. Penang has a population of 1.2 million with 80% Chinese. Which means Penang is ¾ the size of Singapore but only has ⅕ the population, with roughly equal percentage in race makeup. Due to the large Chinese population in Penang, for the first time in 2008, the main political party, BN was voted out in Penang because it is corrupt and the government follows Muslim laws and privileges Malays over other races. Not the smartest policy in light of globalization.

The racist and purist policies are reflected in the names of the food stalls in Penang. Even though the stalls are selling nasi (rice), the shop names must be according to law. Nasi Melayu is sold by pure Malays; nasi kandar by Mamaks, which is a family made of other races marrying into Malay families (people of other races have to convert to Muslim, there is no other option); and nasi padang by Indonesian Muslims. Naming stalls like this is like in Harry Potter, where Death Eaters taunted Hermione and other people from interracial marriages, “half-blood,” or “mud-blood.” It is very terrible to segregate people like this.

Despite the racism in Malaysia’s government, we had a swell time. Penangites are very wonderful people: intelligent, friendly and nice. WE LOVE PENANG! I like it so much it is one of the two places in the world I’d consider migrating, Penang and Taiwan.

Excluding airfare and accommodations, bring about RM80-100 a day to be very comfortable.

1. Taxi: This is the best way to get around because there are few buses. Once you reach the airport, go to a booth called “White Taxi.” A trip to Georgetown, the main area of Penang, costs about RM45.

It is very difficult to get taxis on the road because there are very few and they don’t cruise the roads like Singapore’s taxis. It is best to book a driver for the entire Penang trip. Our driver, Benny Yeoh, is conversant in both English, Mandarin and, I suppose, Malay. Text him at +60-12-483-6453 or if you are calling locally in Penang, 012-483-6453.

2. Bus: There are free buses for tourists. If you want, you can take their public bus, starting from 6am-11pm, running every 20-45 minutes. You can plan your route too. 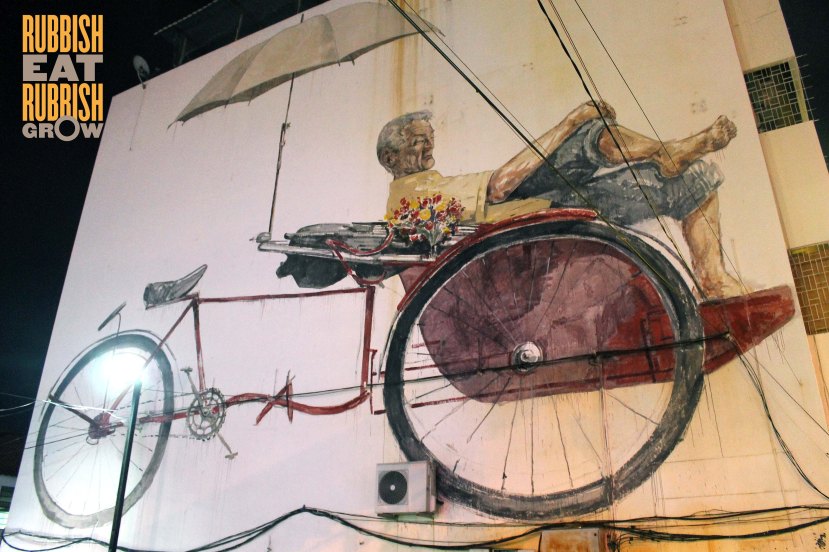 3. Trishaw: About RM30 an hour, a leisurely way to view Penang.

4. Road Names: Jalan = Road, Lebuh = Street.  So there are both Jalan Penang and Lebuh Penang, make sure you ask the address properly.

Where to Stay in Penang

You must stay in George Town area, which is conferred as UNESCO World Heritage site in 2008 for its unique culture and architecture. It is the area with attractions.

At first, we wanted to stay at the most prestigious Eastern & Oriental Hotel (pictured above, taken from their website). All luminaries who visited Penang, such as Somerset Maugham, Noel Coward, Rudyard Kipling and Queen Elizabeth II, had put up at the hotel. But Yandao made a very good point: It is Penang! Did we want to spend so much money on accommodations that we were just going to sleep for two nights? It wasn’t like we were having a staycation. Besides, while it faces the ocean, it is quite far from some tourist attractions.

The best and most central location is book a hotel around Lebuh Chulia. For example, Yeng Keng Hotel, a boutique hotel.

If you’re looking for a cultural experience, Cheong Fatt Tze Mansion, also known as the Blue Mansion, is your place. More about the history of the mansion later, as it is be one of the places on the itinerary. But the Mansion now also doubles-up as a hotel.

Most Budget: We, however, stayed at New Asia Hotel at only RM88 a night for two! The Chinese uncle manning the reception spoke such excellent English. The room had free wifi, and was very, very cheap, conveniently located, and so gorgeously old. We felt like we were in a Wong Kar Wai film. There is even a balcony! 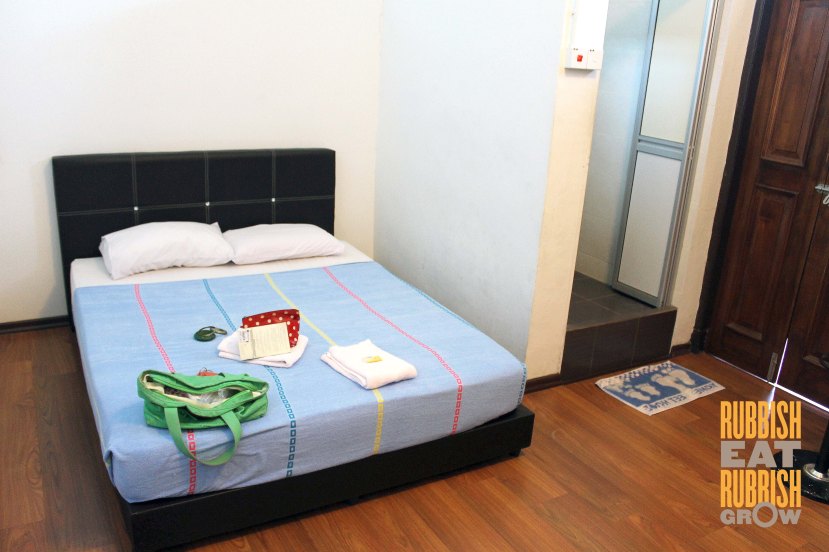 There were, however, several minor inconveniences: the aircon was warm and we sweated; no lifts; near a food street, the noise stopped only at around 1am; not much amenities, no toiletries, no hairdryer, etc, they only provided a towel and a small bar of soap; lastly and most importantly, the toilet is very, very small, and when you shower, you will wet the toiletbowl. Furthermore, the toilet is a cubicle within the room, so when you defecate, your roommate can smell your farts and hear your shit plonk into the toiletbowl. This hotel is recommended for budget travelers who are friends, but NOT FOR LOVERS. Unless you’ve a scat fetish, all sense of romance dies when you imagine the other person shitting.

Note the toilet cubicle at a corner, so your room stinks of your shit. 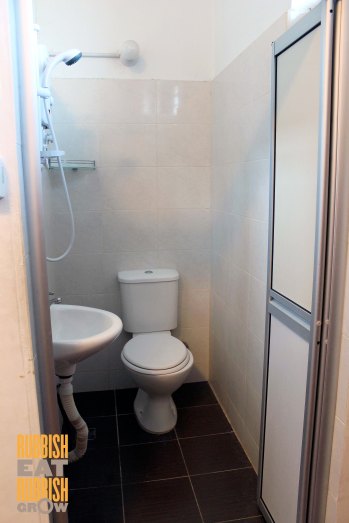 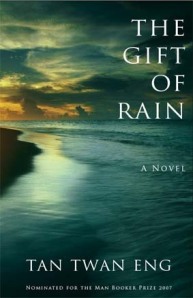 1. Novel: Man Asian prize-winner Tan Twan Eng’s The Gift of Rain describes many places in Penang very well and, although it is a novel, gives recommendations of places of interest.

2. Movies: Some parts of Oscar-winning Indochine and some parts of Anna and the King, starring Chow Yun Fatt and Jodie Foster, were film in Penang. Road to Dawn is a historical re-telling of Sun Yat Sen (played by handsome Winston Chao) who came to Penang to plan a revolution to over the Chinese government in China.

I Georgetown Penang – Newsletter for Penangites on Georgetown.

Penang – Listing of hotels and restaurants.