Autodidactic 29 year-old Han Li Guang serves molecular mod Sin (modern Singapore) cuisine, combining Western cooking methods with Singaporean favorites. Because the food was delicious and confident, it was a shock to learn that Han, former banker, doesn’t have much culinary experience; he worked only 6 months at Garibaldi and studied another 3 at At-Sunrise Globalchef Academy.

There is no a la carte. Set lunch is targeted to start in Apr and 5-course prix fixe dinner at $78+. Even the free bread was impressive. Came with balsamic vinaigrette jam, olive oil powder, and garlic foam. 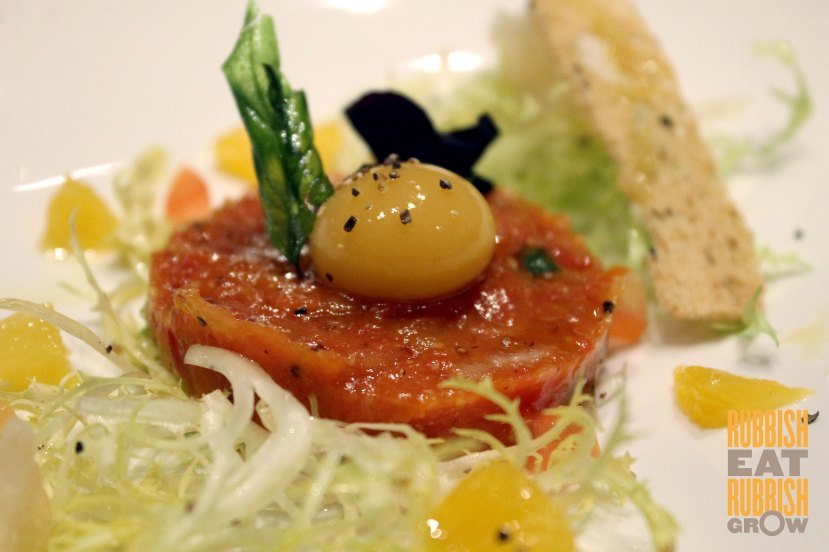 The first course was a salad, a vegetarian play on steak tartar: the acidity of tomato “steak” tartar was counterbalanced by sweetness of mango “yolk”. Cloud-like fluffs of dehydrated tomato beautified the dish. A nice start. 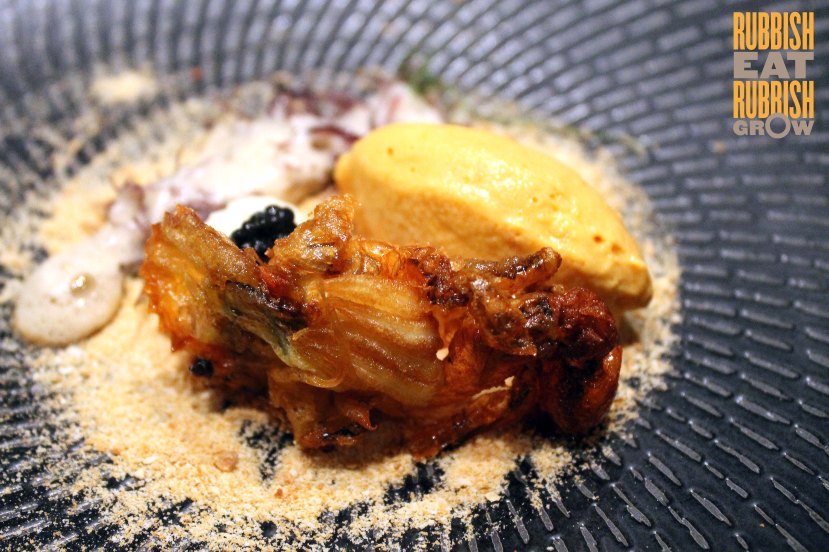 Second course of deconstructed Singapore chili crab, designed to look like a beach. A lone softshell crab was accompanied by a sweet chili crab ice cream and crab mousse, on “sands” of mantou (bread). Some call this the signature of the restaurant, and fair enough, it was as tasty and fun as it looked. When you eat the crab and ice cream together, the hot crab melts the ice cream–complex, contrasting, and delightful.

For the mains, there was a choice between a deconstructed Hainanese curry rice (potato puree, coriander sponge, chicken balls mimicking chicken cutlet, and curry quinoa risotto pretending to be the gravy-laden rice) OR siew yoke fan, 12-hour slow-cooked roasted pork belly with risotto cooked in ramen broth and sous vide quail egg, acting both as an egg in ramen and siew yoke fan.

The Ex preferred the rather spicy Hainanese curry rice, decorated as a forest, “more textures, more complex, more things going on, more exciting.” But it was too spicy for me. I liked the siew yoke fan more. You have to eat the salty risotto with pork belly to bring out the flavours of fats. When I bit into the crackling skin, it was a mini earthquake crunch of bliss. But the Ex found it too salty.

There were 2 courses of desserts: chendol xiao long bao (red bean wrapped in pandan skin, drizzled with gula melaka) and deconstructed apple crumble, which was similar to, but not as good as the deconstructed blackforest at Petite Menu. I’d suggest getting rid of the apple crumble on the menu, and give 3 chendol soup dumplings, instead of 1.

There are many things to love about Labyrinth: (1) Extremely innovative: This is the first time that somebody has combined molecular gastronomy with local hawker fare to such great success, everything was delicious; (2) while Han worked at Garibaldi, his style is closer to Restaurant Andre (#6 Restaurant in Asia), but Labyrinth’s food was way more delectable and memorable and cheaper than Andre at $400/pax; and (3) the food was unpretentious and uncompromising. For examples, the Hainanese curry rice tasted exactly like what it should be, the spiciness wasn’t lowered to suit non-locals’ palates. Siew yoke fan retained its original hawker name on the menu, instead of anglicizing it to pork belly rice. Xiao long bao on menu, not soup dumplings. 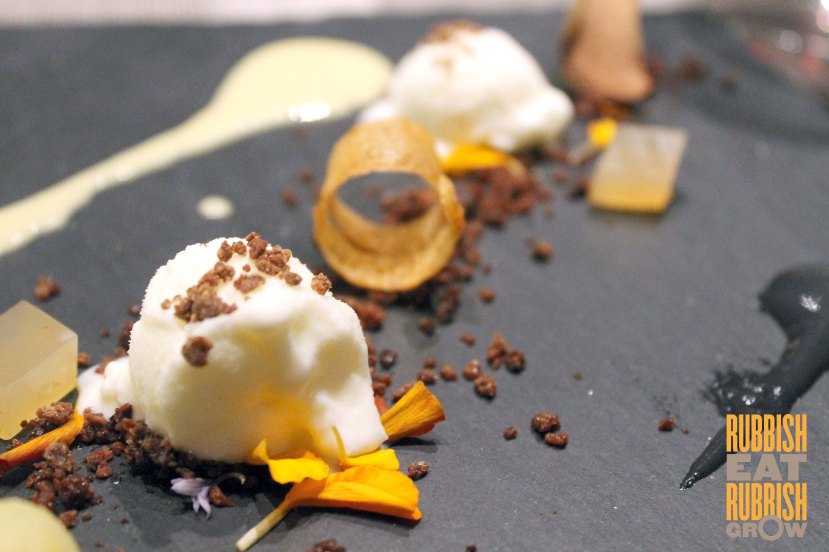 There are, however, two issues to giam (critique): (1) the obvious one is there weren’t food choices, and (2) the decor affects the service. Because food is served over the bar, customers have to receive plates from chefs. In a good restaurant, customers should never serve themselves. That’s what the service charge is for. In all other areas, the service was tentative but good. (This is the same complaint I had for Izy.)

I have great esteem and regards for the intimate and personal haven that Han has created. I have a sense he works for passion, not for profits. Among new local chefs under 40, I’d list him as one of my top 3 favorites. Highly recommended. By far the most interesting and original restaurant this year. Including an inexpensive and easy bottle of wine ($45), we spent about $220 for two.