The only thing I know about the Alps is that they are aliveeeee, with the sound of musiccccc, of many singing nuns. Alpine cuisine is from 8 Alpine countries, including Austria, Germany, France, Italy, Switzerland, Slovenia, Liechtenstein, and Monaco. (I admit, I googled.) But the restaurant focuses on the first 6 countries.

29 year-old Austrian Chef Lorenz-Maria Griesser, who paints in his spare time, started cooking when he was 12, and has a wealth of experience at Michelin-starred restaurants in Germany, including Restaurant Tantris, and Restaurant 181. Ingredients are imported from Europe. And who is Zott? He’s the owner, Christian Zott, who helped Chef Griesser organize his first art exhibition, and the first to buy the chef’s painting. 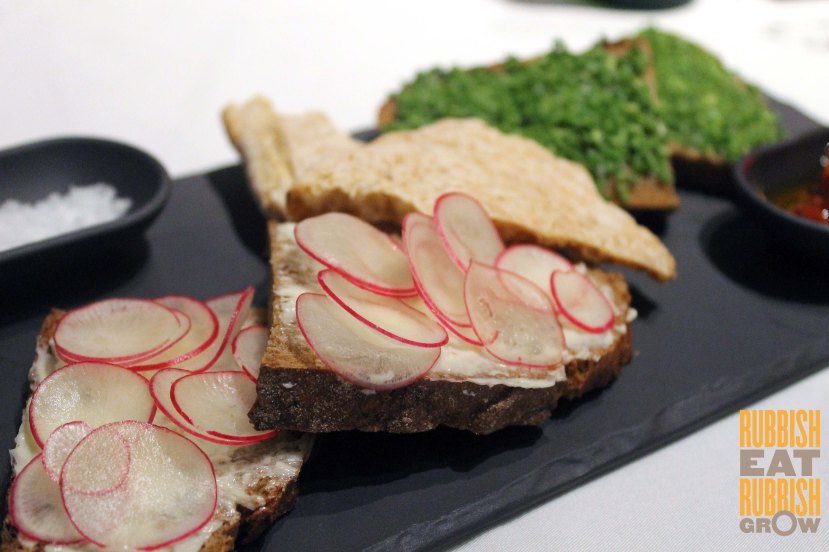 Three types of complimentary bread: two rye bread (one with radish, the other with chives), and an interesting German crispy bread.

The specialties are listed in the first two pages of the menu: tellerfleisch ($75, a 3-course beef); bouillabaisse marseillaise ($87, fish broth); geschmorte lammschulter ($148 for two, lamb shoulder), and kaiserschmarrn, which is a pancake that can be a starter ($29), or main ($32/$45), or dessert ($24). The maitre’d, a nice white lady, recommended kaiserschmarrn as a dessert. 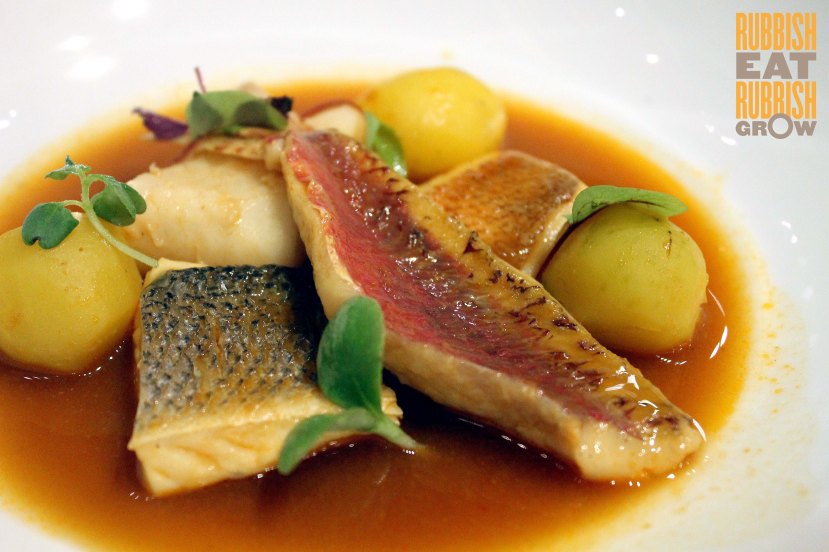 The bouillabaisse marseillaise ($87), a traditional Provençal fish stew, is terribly over-priced but marvellous. There are four types of fish in the broth: rascasse, barbe rouge, seabass and swordfish, varying textures, varying sweetness, all work well with the broth. The broth, which my eating companion enjoyed immensely, is similar to an robust, rich and sweet lobster bisque, with a slight aftertaste of cognac. When you have enough of the broth, apply rouille (garlic mayo) onto a thumb-sized baguette, drop it into the soup, and let it soak up the essence. Superb, but I wouldn’t pay $87 for it again. $30, yes.

Which kinky person can resist ordering an impaled dish called bondage chicken ($36)? Bonus: You get to untie it and release it from its bonds. Can you say 50 Shades of Gray? You can choose from two styles: Bavarian (paprika, curry, cayenne pepper) or Provençal (butter, thyme, salt). The server recommended the former as the latter tends to be dry. True enough, the Bavarian bondage chicken is tender and moist. It tastes curry, and similar to (my companion said) lap cheong. But at some points, there is an offensive smelly aftertaste, almost blue-cheese-sque. I adore blue cheese, but this one is too pungent for me, like a rotting carcass. Still, an enjoyable and lovely dish for most parts. 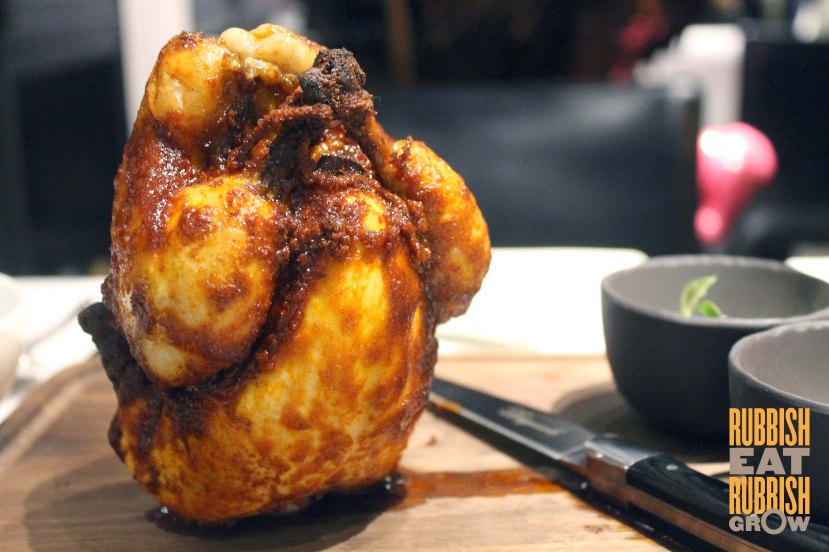 For dessert, the kaiserschmarrn, sisi style ($24), is a must order. It is first baked in the oven for 20 minutes where it fluffs to twice its size. It is then shredded according to tradition, giving it a rustic appearance. Sugar is added and caramelized. As a result, the pillowy pancakes have an eggy aroma, almost cinnamon-like, and crispy at the edges. I’d imagine it to be a dry bread-and-butter pudding. Comes with macerated plums and homemade vanilla ice cream. Among the best desserts I have lately; as my companion wanted to retain his abs, I devoured it entirely. The maitre’d recommended I return to try the savory version, in Zott’s style, which is served with pan-fried foie gras and pineapple-goose liver ice cream, as a starter ($29) or a main ($45).

The decor is classy, dark and sexy, and the restaurant doubles as an art gallery. Special mention to the toilets, decorated as alpine forests, with a wall of cowbells.

The service is wonderful for a two day-old restaurant. I enjoyed chatting with the friendly maitre’d. The servers wear suits but take a look at their adidas soccer shoes.

Including an Italian beer, poured in an Italian, abandoned fashion, lots of foam, we paid $190 for two persons. The food is fantastic, and the experience agreeable, but I don’t know if it is worth the price tag for comfort food that, though a new cuisine in Singapore, has familiar echoes in other European food. I want to return but I can only return when I strike lottery. Ok, so long, farewell, auf wiedersehen, adieu. Adieu, adieu, to you and you and you.