At first glance, Cho Omakase at Boat Quay seems to be like any other Japanese restaurants. You tell Chef Y.K. Chong the budget for your omakase ($50/$80/$120/or higher). You reveal to him your likes and dislikes, and he surprises you. 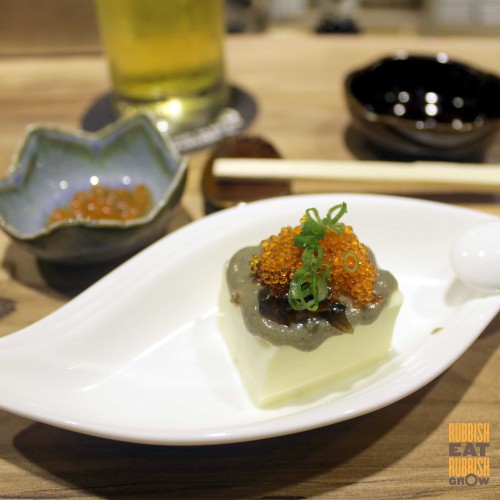 Chef Chong is a homegrown talent whose experience includes Santaro, The Line @ Shangri La, and Bushido, a Japanese restaurant in Bahrain where he won accolades annually during 6 years of his tenure.

Whatever illusion I had of Cho Omakase being a usual Japanese omakase restaurant was shattered when the food arrived. I thought, This isn’t Japanese food. In a sense, it is Japanese food, because the ingredients are flown in from Japan. But the combinations are paired in defamiliarized terms, different from traditional sushi restaurants such as Shinji by Kanesaka, or Tsukiji Fish Market’s famous Sushi Dai, or Tokyo’s Michelin-starred Sushi Aoki.

To top off the uncanniness, this was the third time in 2 weeks that I ate this new kind of Japanese cuisine. (The other two were Boruto and Sushi Murasaki.) I shall attempt to define this new Japanese cuisine I call “Borderless Japanese”: the food is usually cooked by chefs who are not Japanese, but are trained by Japanese chefs. They may or may not have worked in Japan, but they know the customs, language, and culture of Japan; the chefs know their shit. In this new borderless Japanese cuisine, they incorporate new ways of cooking and/or new ingredients, usually native to their home countries. Rules are more relaxed and can be stretched.

Case in point: the black cod (below) is cooked in a Chinese way. Instead of stewing the cod in soy sauce, mirin, miso, and sake, it is poached in a vegetable broth, so that the cod absorbs the broth before fried bits of garlic are sprinkled on top. 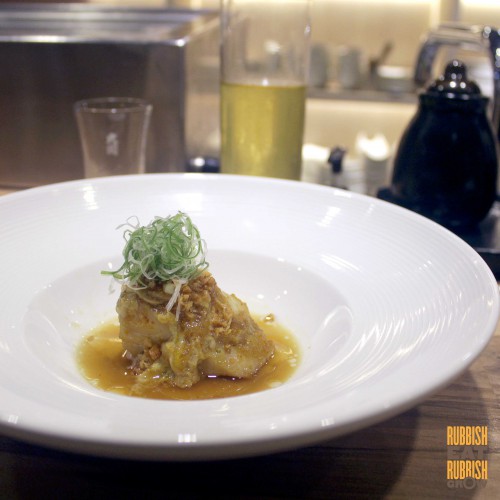 Another example: lamb is an ingredient seldom seen in traditional Japanese cuisine. This Australian lamb (below) is first marinated in miso for 3 days before grilling. And this too is cooked with a new method, not heavily salted like the past when miso was slapped indiscriminately on meat; this is a new style that focuses on subtlety and quality of ingredient. 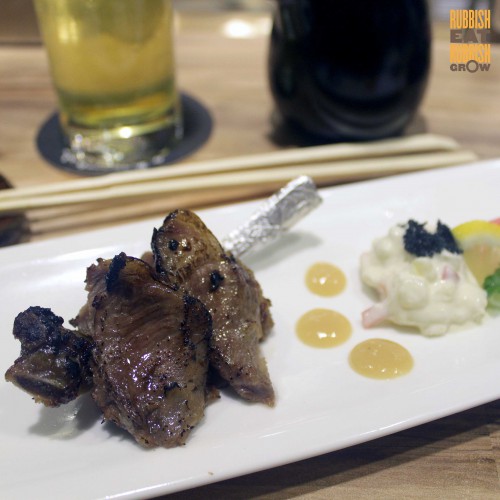 Even the sushi is different. Traditional Japanese restaurants don’t serve salmon, but here salmon sushi is served with an almost imperceptible piece of yuzu, giving a tanginess. The Old Masters would have shaken their heads at anything aburi, and to aburi otoro, to melt the fats off fatty tuna belly would seem a sacrilege–and in this particular instance, I defer to the superiority of the Old Masters.

Do I like this Borderless Japanese cuisine? I admire the idea behind that; I admire that chefs are incorporating their personalities and their own cultures into what they have learnt from Japanese chefs, instead of blindly following recipes.

This new cuisine also pushes and changes the boundaries of traditional Japanese cuisine. Change is neither good nor bad, but it is inevitable to suit the needs of the globalized times. Besides, change requires creativity and courage. You may like or dislike the idea of borderless Japanese cuisine, but you have to give credit to the mettle of the chef.

As for us, philosophy isn’t as important as taste. Although we were still hungry after the $80 omakase meal, both Mr Fitness and I savored every dish served. Chef Chong’s awards are well-deserved.

This is an invited tasting. Thanks, Freddie, for the wonderful company.