Ashino @ CHIJMES: Confirm, Guarantee, Plus Chop Will Get At Least 2 Michelin Stars

Like restaurants in Japan, Ashino at Chijmes has a discreet entrance.

Although relatively unknown, Ashino at CHIJMES may receive Michelin stars. The Michelin Guide loves artisanal Japanese food: Shinji by Kanesaka is a front runner because the Tokyo flagship outlet, Sushi Kanesaka, has 2 stars. Waku Ghin is also likely to get stars, leaving some space for a few more Japanese restaurants. 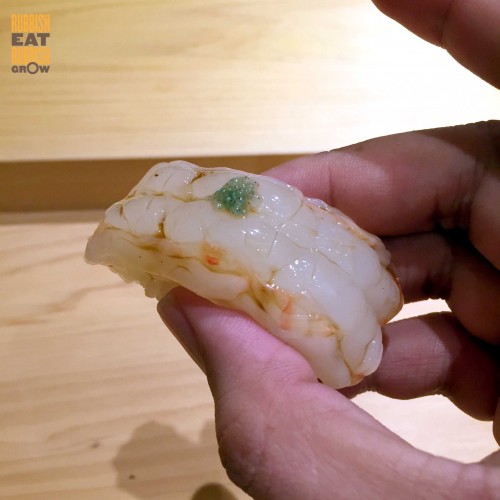 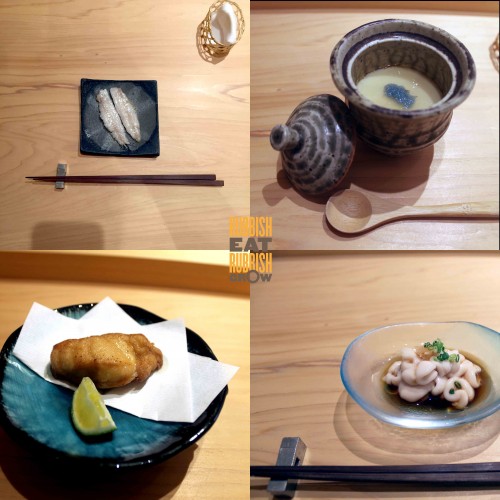 Leaving Hide Yamamoto after 2 years of being head sushi chef, Chef Taku Ashino sets out to show his style of sushi. The Shari-sushi rice, from a blend of Hokkaido and Niigata grains, is cooked in a traditional iron kettle with water flown in from Fuji. Ashino focuses on Jukusei Sushi (熟成寿司), or aging sushi, which will intensify the flavors and break down the sinews to give a tender bite. Like in wushu movies where a pugilist hit opponents’ acupuncture points to immobilize them—haven’t seen that move since the 90s—Chef Ashino uses needles to kill the nerves of the fish, keeping them in a zombie state for aging. Omakase lunch starts from $250++, and omakase dinner at $400, rivalling the prices of top sushi restaurants in Japan. There are less expensive set meal options but why even bother with them which won’t give a full experience?

Gizzard shad (It doesn’t look or taste like it, but I think the chef said it is, may have misheard, let me know if you know); sea eel; tuna aged 18 days; scallop 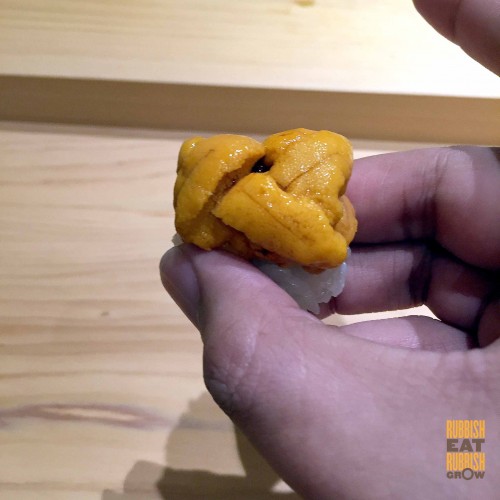 Usually omakase set follows a strict sequence: soup, steamed dish, simmered dish, and so on. But Ashino does things a little differently. The first thing he serves me is sushi, with cooked dishes in between pieces of sushi. When I asked him why, he explained that if he follows the traditional way of omakase, patrons get full even before they reach the sushi, and they don’t get to enjoy fully the true taste. 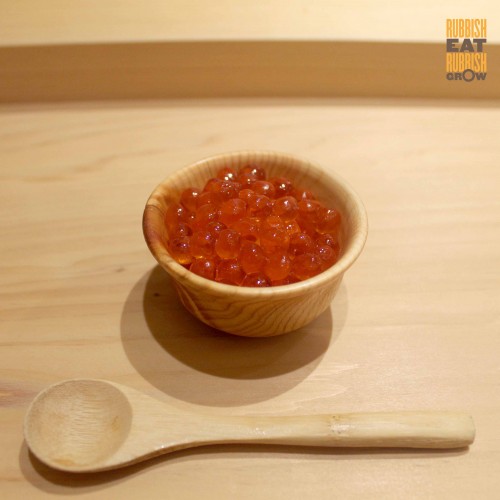 The cooked dishes are competent but it’s really the sushi that shine. Amazing albeit too small. Each umami piece gives bliss and such joy. What impresses me isn’t the fatty tuna aged 9 days or flounder aged a week—it should be taken for granted that they are fantastic, which they are; what impresses me is all pieces are so marvelous that it’s hard to pick a favorite. 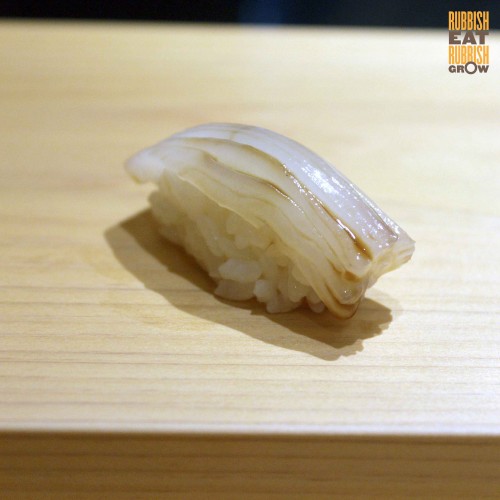 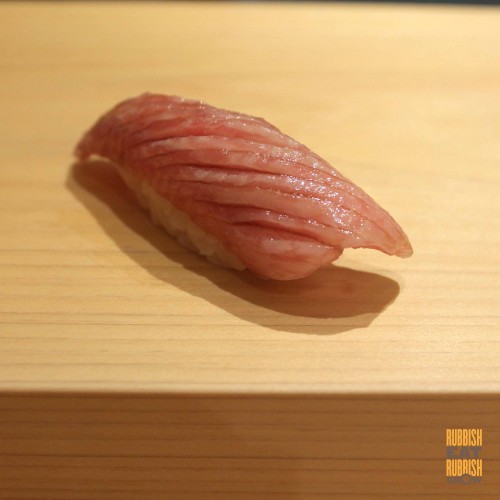 Ok, ok, I’ll pick. It’s a toss up between botan prawn sushi and gizzard shad sushi. I never understand the appeal of prawn sushi until this one: plump and intensely sweet. The latter because the umami creaminess bursts in the mouth.

Even his aged horse mackerel (above)—I usually think it’s a filler for other pieces—is a star. The uni sushi tastes like what peanut butter would taste if it’s harvested from the ocean. With each sushi, I keep looking forward to the next and hope it doesn’t end.

Sometimes he can get heavy handed with wasabi, but even then, the burn is an initial entrance into the mellowing taste of the seafood. Rather than faulting his heavy-handedness, it is a strength that grows from a flaw.  The lightly grilled nodoguro with salt and yuzu sushi (above) is super salty, and super yuzu, but even the strong tastes don’t mask the subtle sweetness of fish, which comes as a brooding aftertaste. The sea eel too is extremely salty but the natural sweetness chases the salt, giving it a complexity rare in sushi. 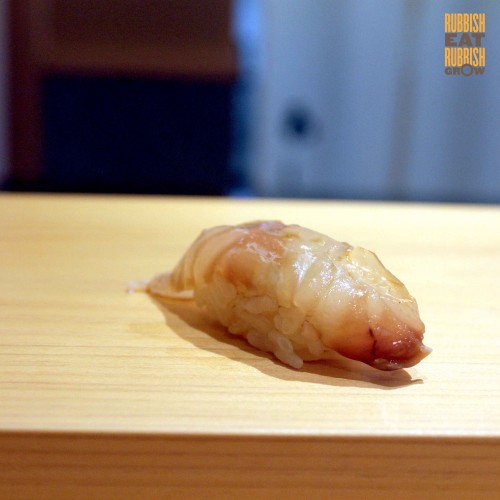 Comparing Ashino with Shinji, where we were served by an apprentice chef, Ashino with its 10-seater ensures that we are served by Chef Ashino himself. It’s altogether a more intimate and artisanal setting. I felt like a guest in someone’s home, which is what supreme Japanese dining is about, and not some Guinea pig for commercialized apprentice chef to gain experience. 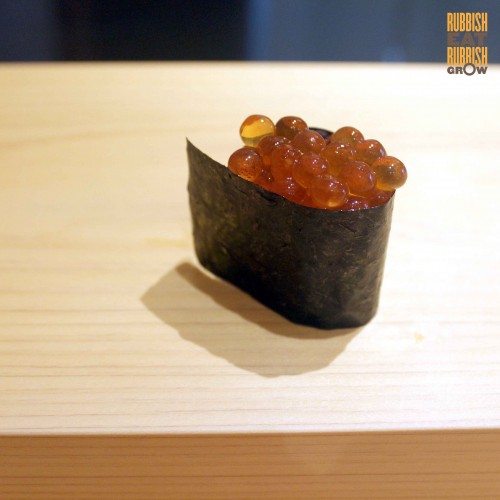 Ashino also can stand up to the Michelin-stars restaurants in Tokyo. If the Michelin inspectors have visited Ashino, then confirm, guarantee plus chop it will get at least 2 Michelin stars.