Had been wanting to stay at a ryokan forever and on this trip to Noboribetsu at Hokkaido, Oyado Kiyomizuya 御やど清水屋 provided such an opportunity. A ryokan is a traditional Japanese inn and usually exists in scenic areas with space.

There are two types of ryokan: onsen ryokan or city ryokan. Since Noboribetsu is an onsen town, Oyado Kiyomizuya belongs to the former category. Fantastic! 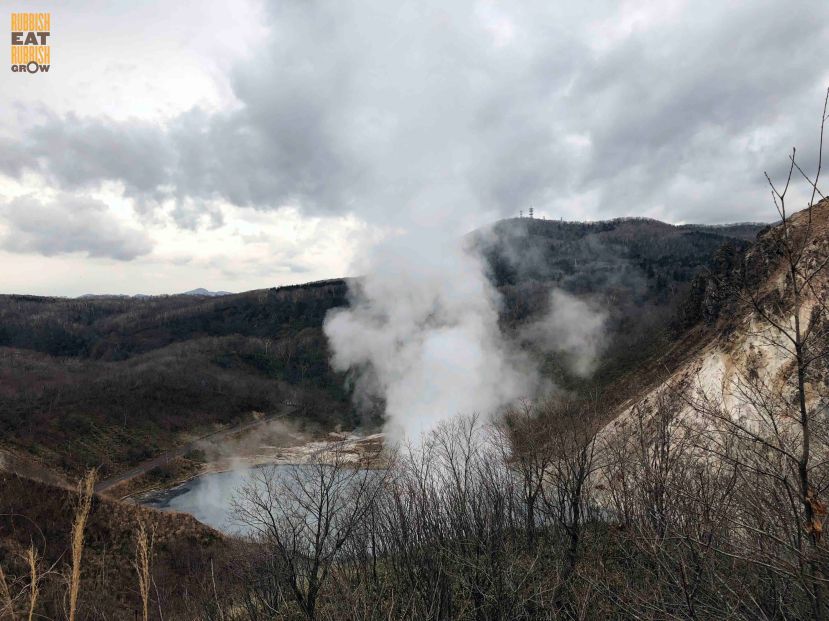 Noboribetsu is most known for its tourist attraction, Jigokudani (地獄谷) or also known as Hell Valley. Hot natural vents of volcanic activity in the earth emit steam, smelling of sulphur. These vents are the source of onsen water. This tourist attraction is only 10 minutes on foot from Oyado Kiyomizuya.

Oyado Kiyomizuya is a smallish establishment, so they cannot accommodate busloads of tourists who usually stay at bigger hotels around the area. This is great for us because we want some peace and quiet.

We drove from New Chitose Airport. It takes 50 minutes if you go by the road with toll but we took 1.5 hours using roads without toll.

We reached Oyado Kiyomizuya and passed the car to a valet. They also carried our luggages. 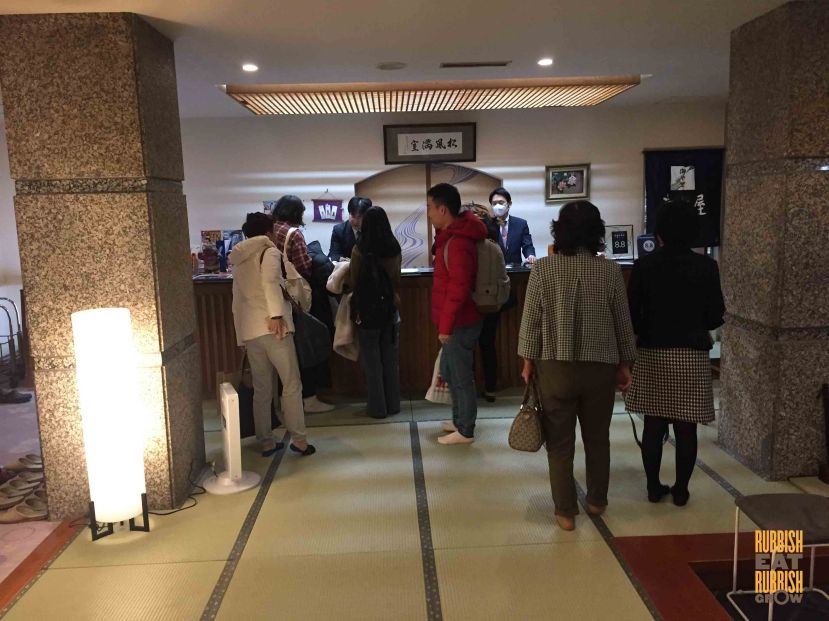 Once you step into the hotel lobby with tatami floor, you have to take off your shoes. So wear socks without holes, and hopefully, your feet don’t stink. They keep your shoes and you won’t see them until you step out of the hotel. (They actually remember which shoes belong to whom and bring them out for you.)

Although the lobby appeared crowded, we were checked within 5 minutes. Everything was ready for us.

When we were shown our room, we WOW-ed like the suaku we are. The room was gigantic, bigger than hotel suites. Except for the toilet, most of the floor is covered with tatami mat, a soft caressing to the feet. 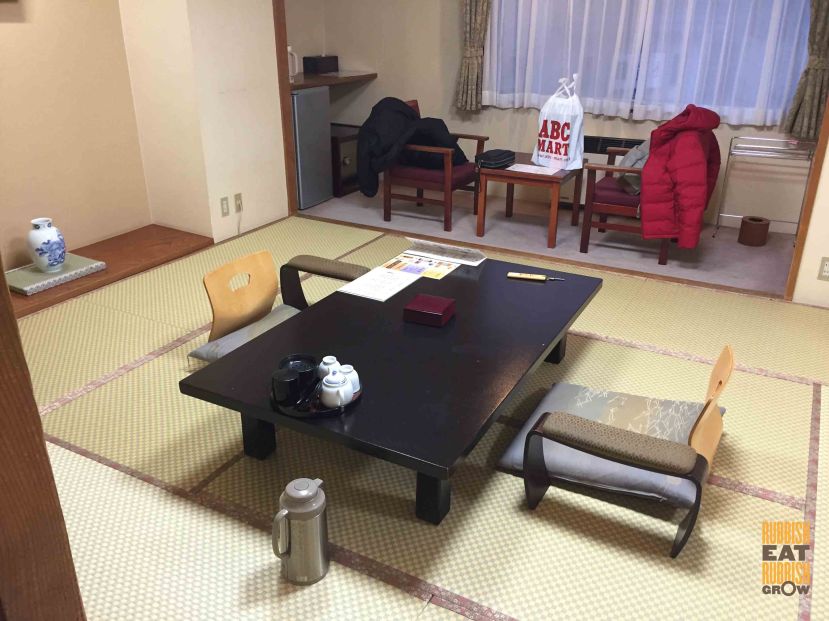 In addition to the sitting area with traditional low table and cushions, there are two armchairs. A flask of iced water with muffled clinking ice cubes and a thermos of hot water for green tea stand on the table. 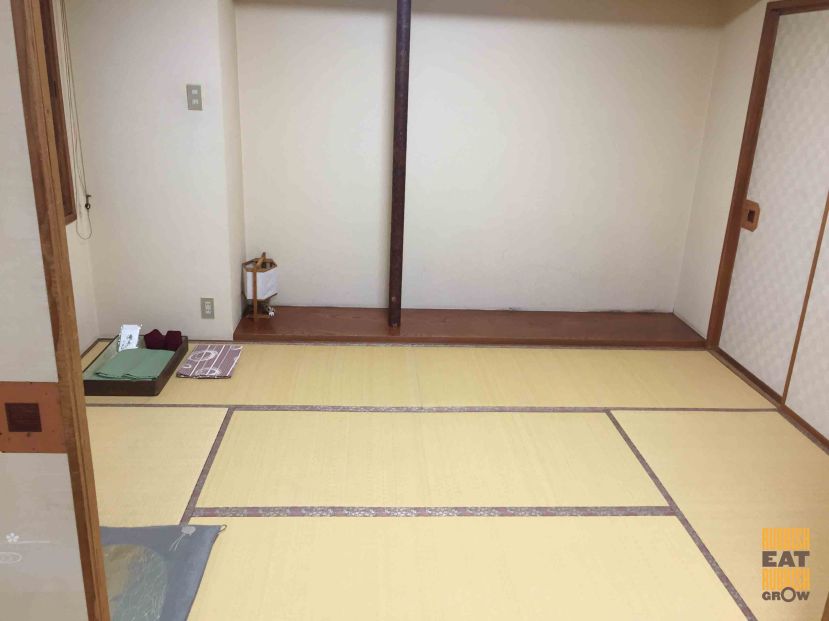 There is a sleeping area, partitioned from the sitting area. It was about 4pm. We flew all night and drove all day and we wanted to nap but the floor was bare. So we dragged out the futon from the cabinets and a Japanese bellhop saw and tsk-ed. hahaha. 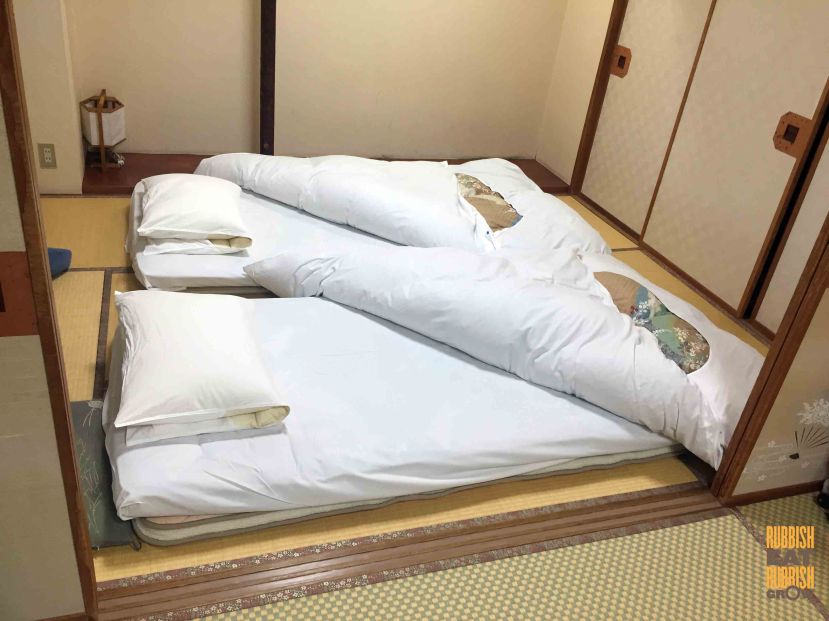 View from the sleeping area

The bathtub and the traditional Japanese shower with a stool are in the door to the left. The toilet is in another cubicle, not photographed.

The best feature of the inn is the rotenburo or outdoor onsen. They only have one rotenburo which rotates between men’s usage and women’s. The rotenburo smells of sulphur. It can have different effects. It can be so relaxing that you just want to sleep after the spa or it can be so energising that you feel like you can do 200 burpees.

So after we checked in, the ladies went to the rotenburo while we the guys rested in our room. Then we had dinner, served in our room. For ryokans, dinners and breakfasts are usually included because ryokans are situated in a rural area and there aren’t many choices.

I expected the kaiseki dinner to be rubbish because when there is no choice, no competition, why should there be any standards? But the meal blew our minds. All four of us were astounded. The chef (whose name is written on the slip of paper listing the dishes in English but I forgot to take note) takes so much pride and care in the food. 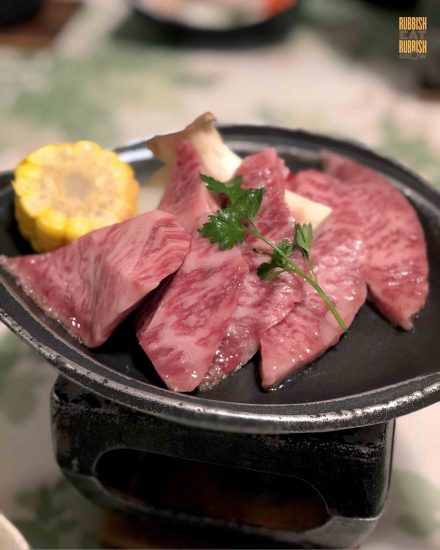 The chef fed us with so much food that even a big eater such as I gave up mid-way. Not all dishes suited our tastes, but the thick slices of beef were orgasmic. This meal alone must cost at least S$150 in Singapore, and we only paid S$220 each for the hotel and meal. So value for money!

After dinner comes breakfast! Seriously how do Japanese stay so slim eating so much? The breakfast was as delightful as the dinner. The rice itself was so delicious I wanted 10 bowls. 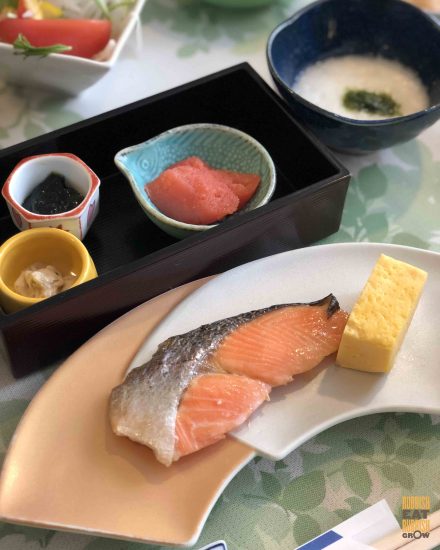 Scallop soup in the morning. It was comforting on a wintry day.

Oyado Kiyomizuya must be one of the most enjoyable hotel stays I have experienced. It provides great comfort and delicious meals. If I have the chance again, I’ll definitely return. To summarise:

Cons
-they set the bedding after dinner and keep it after breakfast. So when we wanted rest during odd times, there was no bedding.
-no room service after a certain time. Everyone has gone home. So if you want amenities like fresh towels, you have to go to the front desk and get them yourself.

You may be interested in…
–How to Engage Geisha Services In Tokyo: My Experience with a Geisha
–Sushi Dai VS Sushi Daiwa at Tsukiji Fish Market Tokyo: Which Is Better?
–Tokyo Itinerary Part I: Accommodation, Getting Around & Shinjuku
–Where to Stay in Tokyo: Ibis Hotel Shinjuku Review