Nipong Naepong at JEM serves only two types of dishes: jjampong (seafood noodles) and Korean pizzas in different variations. The Korean restaurant is franchised by K Food Holdings which also houses the very popular Chir Chir Korean Fried Chicken and Masizzim. They import their own jjolmyeon (wheat noodles) which are made exclusively for the brand. All sauces and soup stocks are also imported to ensure a similar quality to the Korean outlets.

As they cook each bowl individually, we waited for more than half an hour before the first dish came out. We had 5 out of 9 variations of the ppong (noodles) and while there are different degrees of success between them, the noodles have a great chewy texture that soaks up the sauce.

Cha ppong ($15.80) is the original and classic version of the seafood noodles. It comes with fried cabbage, mussels, squid, prawns, and quail eggs. You can customize it to level 1 or 2 spiciness. We can’t take spice so level 1 is acceptable for us. It has a lovely smoky flavour (wok hei!) from the fried cabbage. Although we have better versions of this (such as the one at Twins Korean Restaurant and we don’t have to travel so far), it still stands its own ground.

We had two cream ppongs, much like pastas. The better one, keu ppong-cream ($17.80), is made with milk and cream and can be made spicy or not. Besides seafood, it also has tobiko. This Alfredo-like ppong is sweet and delicious at first but it gets jerlat. The other cream ppong, ro ppong-roje ($17.80), has a pink sauce of tomato puree with cream. There is no subtlety and it is perhaps the one we won’t order. 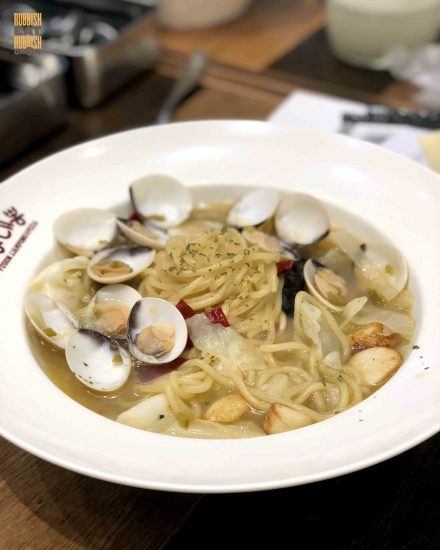 Continuing the Italian-Korean pasta-ppong fusion, the vongole ppong ($16.80) comes with clams in white wine and garlic sauce. I am not a purist but I very much prefer the Italian version because this one doesn’t have the sweetness from the clams.

Our favourite ppong, tae ppong ($15.80) is the Korean’s imagination of a Thai dish, specifically, the phad thai. But it is only slight sweet. In fact, it tastes more like our maggi goreng found at our prata or Indian eateries. The noodles, still al dente, is stir-fried with lots of seafood, so the dish is moderately spicy with wok hei; addictive and appetising.

We prefer their pizzas to the ppongs only because for the pizzas, they don’t try to do fusion things; they do it their own way. For the crust, they use tortilla wraps and encourage diners to roll it up to eat. Out of the four available pizzas, we tried two and they are both sweet, and perhaps are more suited for desserts.

The ninae pizza-spinach ($18.90) may be super smelly—actually, not sure why it smells worse than blue cheese when none of the cheeses here are foul-smelling–but it is super delicious. The crust is drizzled with honey and parmesan, and it has spinach, cream cheese, and cherry tomatoes. This is tasty! I ate three slices! Spinach is healthy, right?

Normally, I disapprove of carbs-on-carbs combination but the ni pizza-sweet potato ($16.80), which has sweet potato puree slathered on top, is addictive especially with their homemade whipped cream.

Before I went to Nipong Naepong, I thought, this is really an unfashionable restaurant. Who eats carbs these days? But apparently, I am the unfashionable one because the restaurant was packed when we were there on a weekday night. And besides, the food is decent and enjoyable.