Heard many friends raving about Bakalaki Greek Taverna at Tiong Bahru and yes, it is indeed excellent. It is hard to find the restaurant because it’s not at the Tiong Bahru market side; it’s actually on a small Flatiron piece of land along the main road. If you are driving, you go around the land and watch out for a blue sign that says public carpark.

The Mediterranean decor is amazing with cyan highlights and bleached wood, characteristic of Greek islands. But how long haven’t the cushion covers and upholstery been washed?

The lamb chops are spectacular! They are so tender and thoroughly marinated that even the inside holds much flavour. Super succulent and smokey. It’s slightly sourish (did they marinate it in yogurt?) to give a nice, appetising tang. It’s fat but not greasy and not overwhelming.

Greek food is known for their fresh seafood and this octopus hits the mark. The magic, I think, may be in the sauce that they slather on octopus. (Is it the same sauce as the lamb chops?) It’s buttery, lemony, and herby of oregano. It’s cooked perfectly, just the way I like it, with char on the outside but inside, it’s chewy and soft. 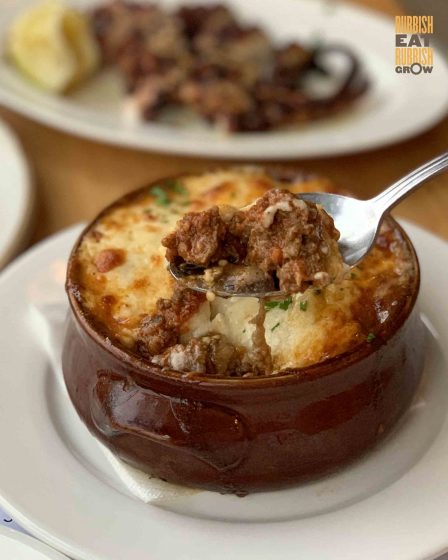 Moussaka is the quintessential baked Greek dish. I order it at every Greek restaurant and this version is among the best. The eggplant in some of the moussaka that I’ve tried turns out mushy and unrecognisable but here, at the bottom layer, they put whole sliced pieces with skin-on. The skin is bitter on its own but if you eat it with other components, the bitterness merely acts an additional range to the delicious flavours. The top layer is super, super delicious: The mashed potato in bechamel sauce is extremely smooth without the grittiness some mash have. Also that cheese layer – melts seamlessly into the mash. Terrific. 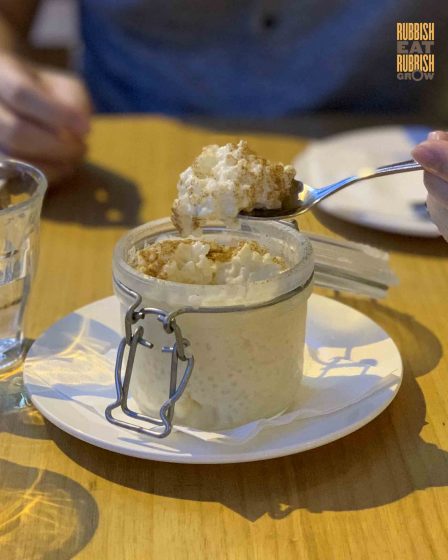 Delicious as the food is, the service, however, is not great right from the start. Although we made a reservation and asked for an indoor table, the maitre d’ showed us to a seat at the bar with two semi-circles side by side. So we wouldn’t even be facing each other. I told him I didn’t want that table and he did not offer me any other, so he chucked us to an outdoor table by the road with exhaust gases. Later, I saw him offer two white ladies a proper table inside the restaurant. Even much later, when we left 2 hours later, at about 8pm, the indoor restaurant was half empty. He could have given us a table indoor. I don’t understand why he didn’t.

I think his attitude has affected his staff because the waitress serving us gave us a black face throughout the meal. People know that I’m super nice and friendly to wait staff, but she was all thunder clouds and lightning. We customers go out for dinner for a good time and we don’t want to encounter such service. She doesn’t have to smile but she should at least be pleasant and shouldn’t act like she couldn’t wait to leave our table (it wasn’t busy, we arrived early, no other guests.) I saw her laughing with other customers, so I don’t understand her attitude towards us.

You may be interested in…
–Mykonos On the Bay, Quayside Isle: Fantastic Greek Food That You Won’t Make You Koon in Sick Bay
–Alati Greek Restaurant, Amoy Street: A Terrible New Restaurant
–Maggie Joan’s, Amoy Street: New Chef and New Menu on Their Third Birthday
–Claypots Full Circle, Amoy Street: No Claypots at this Seafood Restaurant