Som Tam, Orchard Central: Waiter! There is Durian in my Curry! 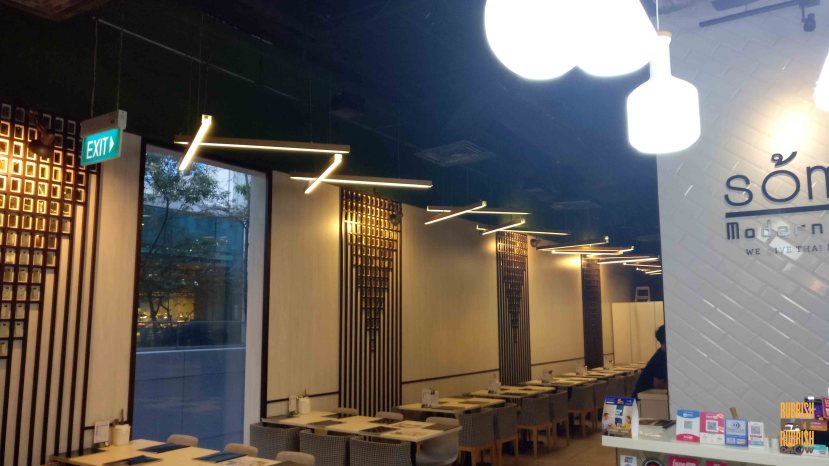 Named after the popular Thai dish, green papaya salad, Som Tam at Orchard Central is a modern Thai fusion restaurant helmed by Ralph Liou (formerly from the Minor Group with restaurants like Thai Express and Basil Thai Kitchen under their belt) who rose through the ranks to become a chef in his own right. For the décor, some minimalist mind has been hard at work creating this oasis within Orchard Central mall; closer inspection reveals the designer’s penchant for geometrical shapes. 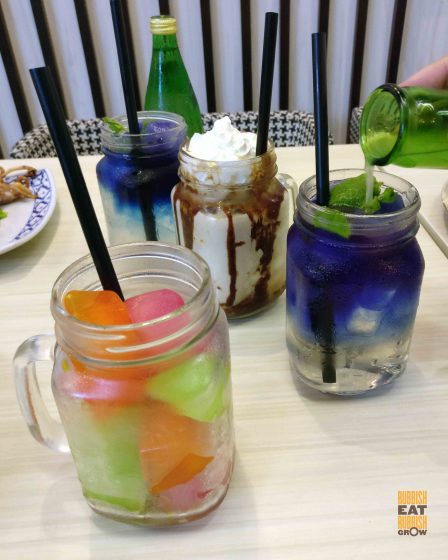 Among the four new drinks, the most refreshing is the blue cha with coconut ($6.80). With coconut juice as your base, you really can’t go wrong here. The blue comes from the butterfly pea ice cubes that hypnotically melt into the drink (#HipsterMuch).

For the new food menu, the Thai-style grilled squid with mentaiko (2 pcs, $18.80) has a great chewy, not rubbery, texture, a smokiness, and an excitement of the “spicy” mentaiko (the quotation marks because my eating partner admits he is highly sensitive to spice. I on the other hand have to do a triple take before I realise there’s any spice at all).

There is little to fault the Massaman curry with roti ($23.80). Tender chicken? Check. Nutty flavour? Check. Fluffy roti? Check. Zesty side salad that refreshes the palate? Check. Size-wise, it feeds 2, possibly 3-4 if you order rice or more roti. As a heat seeker, I think the spice level is set low, but then again massaman curries aren’t meant to make you sweat, so that’s fine. The only thing that stands out, ironically, is how it doesn’t ‘stand out’ from other Thai fare. Still, I’m partial to curries, so this one gets a pass from me.

The piece de resistance is certainly the “SPECIAL DISH MUST TRY” (as the menu screams out to us) black chicken curry with Musan King durian ($26.80)! Essentially to the Massaman curry with roti, what Chef Liou has done is to add squid ink (to create the colour and savouriness) and a hearty dollop of Mao Shan Wang durian (for that characteristic sweetness and pungency that durian lovers all know). While my dining partner finds it strange, I cannot stop myself from having spoon after spoon of it! What is truly amazing is how the potatoes take on the flavour of the curry, and crumble away in your mouth to release the flavours in a single burst. 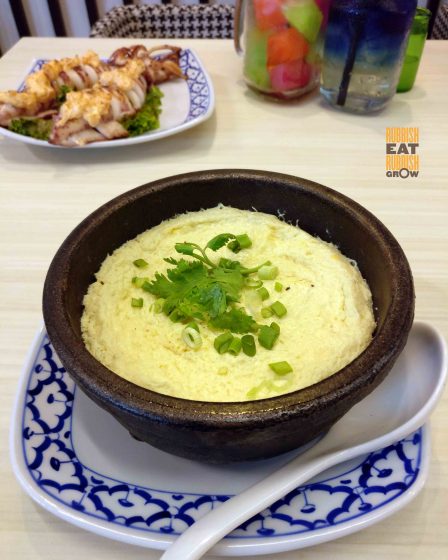 The Thai souffle steamed egg ($10.80) is intriguing. It is fluffy, with a hint of sweetness that hides playfully among the saltiness. But perhaps because of the intense flavour of the Mao Shan Wang durian in the previous dish, the egg souffle is now very salty. The souffle is cooked in Tom Yum broth but there isn’t the sourness that Tom Yum is known for.

In all, I give a thumbs up for creativity, even if not all the dishes land well. My dining partner likes the squid the best, while I would go back for the black curry and the blue cha, and because they have an extensive menu that looks very promising.

Written by Tan Ken Jin. True to the name of this website, KJ is closely associated with rubbish, organising litter-picking activities that culminate in a makan session (because #Singaporean). That, and he once tried marinating salmon in blueberry juice and orange juice. He survived.