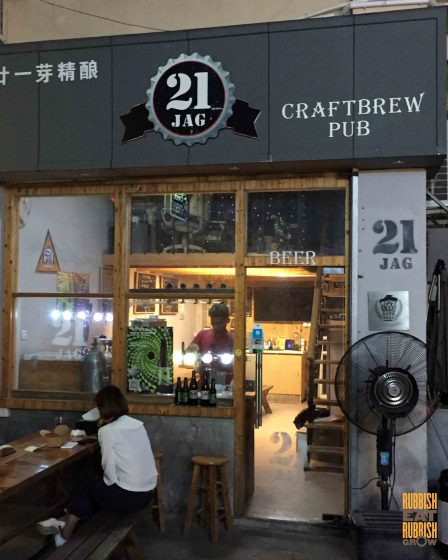 And apparently other people think so too. Their typhoon APA 台风美式淡艾 (¥30) has won awards. (In general, a pint of their beer goes from ¥20 to ¥40, which is quite pricy, considering that a big 1-litre bottle of beer goes for ¥8. And that’s why this bar is mostly patronised by expats. 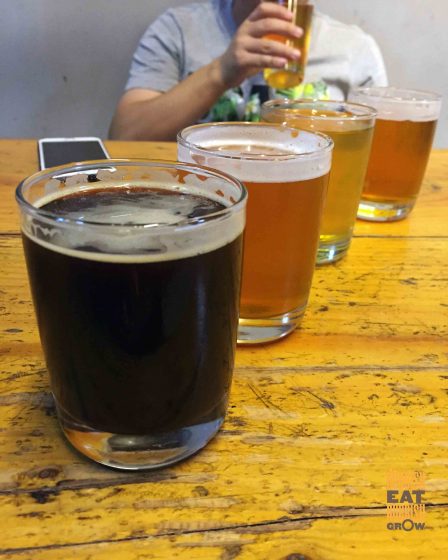 They have 9 types of home brews, and 2 come in bottles. They also have a sampling flight (4 glasses of any selection x 200ml, ¥50 or 6 glasses ¥70). I took the four glasses, trying four types of beer. The coffee beer 啤咖 Bravo (¥40) is very distinctive and super likeable for those who like to drink their coffee black. The coffee flavour is very potent, and I dare not drink too much for fear I couldn’t sleep. But it is also aromatic with depth.

The typhoon APA, their award-winning beer, is what people would call well-balanced. It starts off by being sweet, transforms into a floral-ness, and then mellowed into a hop-py bitterness.

My favourite is definitely without doubt the osmanthus ale 桂花忽布艾尔 (¥30). In China, cassia wine is the traditional alcohol for “reunion wine” on mid-autumn festival. And perhaps this beer is inspired by the wine. And I have not expected osmanthus flower to go so well with beer: very fragrant and sweet. For a true beer connoisseur, perhaps she or he won’t like this sweet beer which can be a little monotonous, but for me, I had much fun drinking it.

The last beer I tried, Old Driver IPA 老司机印度淡艾 6% (¥30), lives up to its name. It really does taste like an old taxi. Initially, there is a taste of barley, which evolves into a cockroachy musky taste, which then transforms into a floral-ness, and finally into a extremely, extremely bitterness, almost like leather and the aftertaste of very effective Chinese herbal medicine. I can’t stand it, but I think it’s super interesting and fun.

This place is so excellent that I have already visited it twice. I will probably visit it more since the beers are fantastic and the place is quiet, conducive to conversations.